Matt Ficarra, 30, became paralyzed in 2011 when he jumped off a boat into the water without realizing how shallow it was. He didn’t let the injury stop him, though, managing to learn to drive, live on his own, and maintain employment.

Jordan Basille a former classmate who had turned him down dating on a few occasions since she found him ‘obnoxious’ met again through mutual friends six months after the accident. They began texting back and forth on a regular basis.

“We got to know each other that way before we started dating,” Basile said.”He was more settled then, and I was in a better place too. We have been together every moment since then. We have fun together, and we don’t let life pass us by.”

Ficarra said Basile knew his limitations when they fell in love – and she’s been there for him at every turn. They don’t let his paralysis get in the way of having fun – they stay active. . And in December of 2013, he got engaged to Jordan Basile. That’s when he decided he wouldn’t be in his wheelchair at their wedding. “I told myself that I would walk with my bride down the aisle,” Ficarra told the Syracuse Post-Standard. It was Matt’s doctor who first suggested the robotic Exoskeleton suit. The only problem — The bionic exoskeleton, which is used to help people who are paralyzed move their legs with the aid of a helper and a sci-fi-like apparatus, was located at a rehabilitation center in Allentown, Penn., which is a seven-hour trip from Matt’s home. 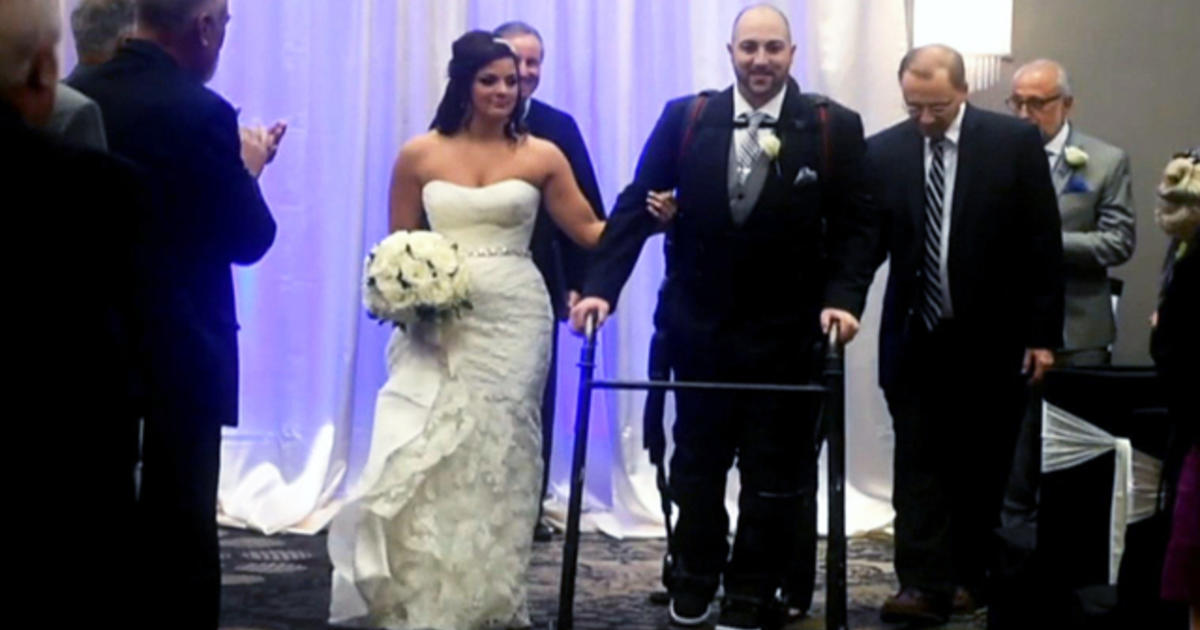 But Matt had set a precedent. And he didn’t let this latest obstacle get in his way. So for eight months, Matt drove seven hours every week to the Good Shepherd Rehabilitation Center to practice walking in the Ekso. And when his wedding date arrived, he walked down the aisle, as planned.

Many guests wiped away tears as they smiled broadly, snapping photos and cheering as the couple made their way down the aisle past the rows of seats. The five bridesmaids – dressed in off-the-shoulder gowns with bouquets of white flowers – also dabbed at their eyes. 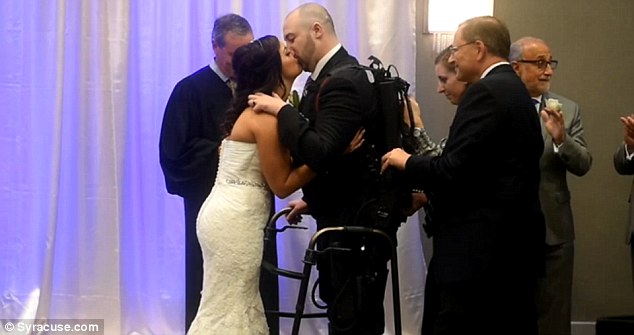 “It’s spectacular,” said Frank Ficarra, Matt’s father who also served as one of his three best men. “I am so proud of him. He’s determined and he accomplishes what he sets out to do.

“He doesn’t give up on anything,” Frank Ficarra said.”He’s a gem.”

“We love to travel – we’ve been on a cruise and to New Orleans,” Basile said. “We go out to dinner, out on my dad’s boat, we grocery shop together and we also love to watch football. And Matt is a huge SU fan.” “I’m so happy for him,” she said.”Walking down that aisle means a lot to him. But for me, it doesn’t really matter. He could be sitting or crawling down the aisle – all that matters to me is that he’s by my side.”

The portable bionic exoskeleton helps patients whose legs are paralyzed stand and walk. The battery-powered apparatus straps onto Ficarra and allows him to take normal steps.

Matt had a new goal: Raise $130,000 so he could get an Ekso of his own to use on a day-to-day basis. “In the summer of 2015, an exoskeleton specifically designed for at home use helped Matt’s to walk on a daily basis.” Thanks to the crowd-funding that made it possible.

“Besides the endless medical benefits, daily use will provide Matt with the utmost confidence and freedom to live his life as if he was never paralyzed in the first place.”