Einstein, the African grey parrot, became a star after a winning performance on the Animal Planet game show Pet Star.

Einstein lives up to the name and will prove to you that she is definitely not bird-brained! She has a vocabulary of more than 200 words and sounds.

She can perform nearly half on a cue from her trainer, Stephanie White. She can also impersonate a spaceship, a monkey and even a skunk. 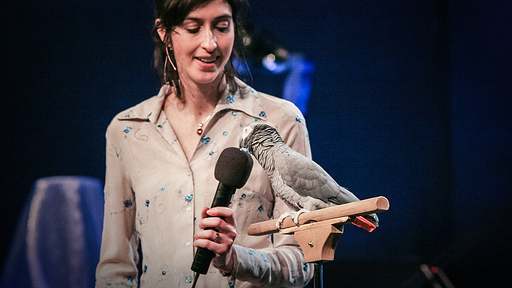 Einstein is part of the Knoxville Zoo’s outreach program, helping educate thousands of visitors about the natural world every year.

“Einstein’s trainer … estimates it can make 200 sounds (including words). The bird knows about 70 on cue and the others it may just do on her own. White says Einstein babbles all day.” — CBSNews.com

There is another African grey parrot who is a healthy competition for Einstein and they share the same name. But they have respect for each other and have their individual special traits.

Witness the Birds-of-Paradise in all its Heavenly glory

Can we accept people for who they are?

What Drives People to take part in the world’s most dangerous race?

The wisdom of a third grade dropout will change your life

Join us in the cockpit flying into Queenstown, New Zealand

Witness the Birds-of-Paradise in all its Heavenly glory

Awesome Videos Suren Rao - October 17, 2017
The birds-of-paradise are among the most beautiful creatures on earth—and an extraordinary example of evolutionary adaptation. Few have witnessed in the wild, the displays...

Can we accept people for who they are?

Culture Suren Rao - October 16, 2017
You know the toughest thing is to accept people for who they are. Because so many things come in the way --- your ego,...

What Drives People to take part in the world’s most dangerous race?

Awesome Videos Suren Rao - October 13, 2017
Is it a rush of adrenaline or challenging your own limits or going beyond what seems humanly impossible or is it plain and simple...